Agaricus bisporus is one of the most cultivated edible mushrooms worldwide. Moreover, it is a species adapted to a humic-rich leaf and needle environment, a unique niche in the sequestration of carbon. A striking expansion of its heme-thiolate peroxidases and beta-etherases is distinctive from Agaricomycotina wood-decayers and suggests a broad attack on decaying lignin and related metabolites found in humic acid-rich environment (Morin et al., 2012).

A. bisporus is also an amphitallic species with a pseudo-homothallic, a heterothallic and a homothallic life cycle, designated as A. bisporus var. bisporus, var. burnettii, var. eurotetrasporus, respectively. A. var. bisporus produces basidia with predominantly two heterokaryotic spores in which post-meiotic non-sister nuclei are paired, whereas var. burnetii produces mainly four basidia, each spore receiving one of the post-meiotic nuclei. The rare var. eurotetrasporus produce homokaryotic spores germinating into fertile homokaryons. Var. bisporus and var. burnettii also show remarkable differences in the meiotic recombination landscape (Sonnenberg et al., 2016). Whereas in var. burnettii crossovers can be found over the entire chromosome, in var. bisporus more than 95% of the crossovers are found to the first/last 100 kb of each chromosome. These extreme differences in meiotic recombination makes A. bisporus a useful model to study genes involved in positioning meiotic crossovers. The genomes of the var. bisporus and var. burnettii has been sequenced de novo, assembled from telomere to telomere and annotated (Sonnenberg et al., 2020). In addition, the putative centromeres of two var. bisporus and one var. burnettii strains have been fully annotated, revealing for the first time the composition of large centromeres of basidiomycetes. 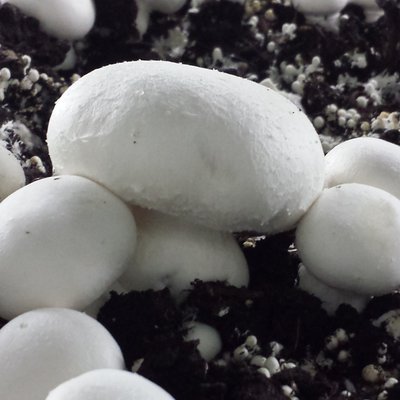