Members of the fungal genus Ophiocordyceps can infect ants and manipulate their behavior. Under the influence of the fungus, the ants will climb up a tree where they eventually die. These infected ants are called zombie ants. Next, a fruiting body grows out of the head of the ant, spreading the fungal spores over the ant colony below.

The aim of the project is to identify the genes involved in behavior modification. This is accomplished by infection experiments, genome sequencing, and RNA-Seq transcriptomics during behavioral modification. So far, many candidate genes have been identified that likely play a role: enterotoxins, secondary metabolites, and other secreted proteins and molecules. Furthermore, it appears that the fungus affects the biological clock and olfactory senses of the ant.

This research project is a collaboration with the lab of Charissa de Bekker at the University of Central Florida. All lab experiments are performed in her group, and some of the bioinformatics has been done in our group. All the genome sequences that resulted from this project are available as Genome Portals. 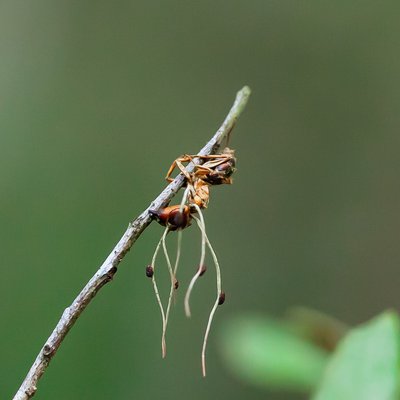 Figure. An ant that was infected by the fungus Ophiocordyceps camponoti-floridani. The white strands are the fungal fruiting body growing out of the ant. Photo by Roel Fleuren.